Apple (AAPL) apple earnings released its earnings for the June quarter. These were slightly higher than consensus estimates both for revenues and EPS. Revenues came in at $35.3 billion vs. $35.01 billion expected and EPS came in at $7.47 vs. $7.32 expected.

Apple also guided as follows for the September quarter:

A range of $34 to $37 billion has a midpoint of $35.5 billion. Market consensus was for $37.11 billion, so any of these levels represents a miss even at the high end of guidance. At $35.5 billion, revenues would be 4.3% below expectations — at the midpoint. At the high end of the range revenues would hardly miss the present expectation. This is better than last quarter in the sense that last quarter the midpoint guidance implied a 12.3% miss and the high end of guidance implied a 9.8% miss. While this guidance still implies a bit of downward revision, the market liked it during the after-hours session.

Year-ago revenues for the September quarter were $35.97 billion, so just meeting the midpoint of guidance would imply decreasing revenues. At the high end of guidance there would still be a bit of revenue growth.

Taking into account the guidance items, this is what we can come up with for the top and bottom of the gross margin guidance at the three possible levels for revenues ($34 billion, $35.5 billion, and $37 billion): 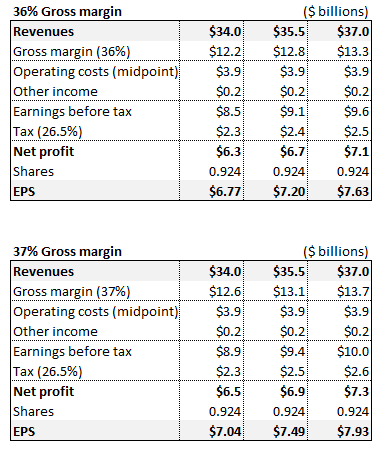 As we can see, the guidance implies EPS between $6.77 and $7.93. Also relevant, during the March quarter Apple came in at $7.42, near the $7.46 top of the range I estimated. Thus we could conceivably expect that Apple is not going to come far from the top of the guidance this time either ($7.93).

These estimates compare to the existing consensus of $7.96, which saw a significant downward revision in this last week. If we were to just compare this range of estimates to the $7.96 consensus, the downside would be between 0.4% and 14.9%. Last quarter the downside was between 18% and 27%. But as I said, Apple came in at the top of the estimated range, and if it does it again, then there’s nearly no downside to the current earnings consensus. It is probably this that’s helping Apple shares in the after-hours session.

Finally, this estimate range implies a drop in earnings from 2012 of between 8.7% and 22.1%. Thus, while Apple is celebrating in the after-hours session, it probably won’t go too far.

Apple used to exceed its earnings guidance considerably. Now it seems to be targeting a realistic range, though as we’ve seen it still came in near the top end. I had called attention to this change in my previous article on Apple’s guidance, and it probably remains true for this quarter as well.

Apple’s guidance for the September quarter — while not fantastic — seemed to allay fears that it would again be disastrous. At the top of the estimate range the earnings guidance implies almost no downward revision to estimates, even if again, it also implies earnings which will trail 2012s.

At least this guidance once again puts the spotlight on the new products that are supposed to be announced at the end of September. With Apple’s low valuation and the prospect of new product launches coming up, this guidance is mildly positive.

We hate spam just as much as you
This article was posted in Market Analysis.